This guide was made to promote rover strategies other than monospam. You can improve this guide by:

This guide was created by Cliver Forsaken.

Use: 3 darts charge the front, 2 scout the flanks; or all 5 scouts stay together for increased firepower. You will be surprised to see the full wide range of units 3 darts can easily pick off in 1vs3. The Vultures squad generally specializes against lone raiders, builders, mexes, skirmishers, and even artillery units; and they serve as great scouts due to their cheap production cost, great sight range and mobility. Their combat effectiveness is doubled when they escort scorchers, and they're great at severely weakening key targets like commanders.

Fun Fact: 5 darts can take out a picket with only two friendly losses.

Challenge: Darts are quite fragile, and do not survive quick ambushes. Besides dealing poorly against obvious counters like riot units, they generally lose when facing fair battles against raider gangsters.

Use: Scorchers overwatch the front, fencers deal the damage. While scorchers are quite terrible at approaching lotuses, chasing raiders, fencers face none of these weaknesses. Scorchers with fencers are like ronins with reavers, except rover counterpart is nearly twice at fast as the cloakbot counterpart. Fencers, unlike ronins, are also capable of reliably hitting opponent's raider units outside their range, if protected well enough, which can force the opponent to rely on radars instead of light scouts for watching your squad movements. Two fencers can take out several lotuses and mexes from range, while only a single kodachi is needed to take an undefended mex in sheer seconds.

Additionally, 1 scorcher can take out a lotus at the cost of most of its health, and 1 scorcher with two darts can (somehow) beat a lotus while keeping half the scorcher's health. Facing 3 scorchers and 5 darts is a death sentence to a lone commander.

While raiders and skirmishers are generally made for offensive reasons, the benefit of the rover's scorchers and fencers is that the fencer can serve as a mobile picket in your base, while the scorcher can serve as a mobile lotus you don't want to get close to. They may be more expensive, but they do their job if you need to relocate your defenses to another point on the map quickly.

Challenge: Fencers cannot kite as well as other skirmishers. As such, they are less effective against reavers and other riots, and are vulnerable to artillery strikes. Place fencers in the enemy's lines, get a few lotuses and mexes destroyed, watch the enemy's movements, and retreat if your opponent's army is getting close to your fencers. If the opponent focuses on building raiders, they can outnumber scorchers and fencers; and thus, you may need to queue up a ripper to pick the Vulture Overseers squad up from a bad engagement. Scorchers are also not capable of taking a lot of damage; as such, they should avoid taking too many fights, and they need to have areas they can retreat to, such as allied static turrets.

Use: Unlike scorchers, ravagers can freely in with lotuses, allowing the ravager to destroy a lotus and a mex by firing 4 shots at each. The squad is capable of picking off lone riots and assault units, while the rippers ensure that no enemy structure or unit is left behind, besides fending off enemy raiders. Rippers are just as good at dealing with cheap, lone riots, and can cut off enemy advancements quickly, take engagements the enemy does not want you to take, and stab the enemy in the back far faster than the enemy can react! 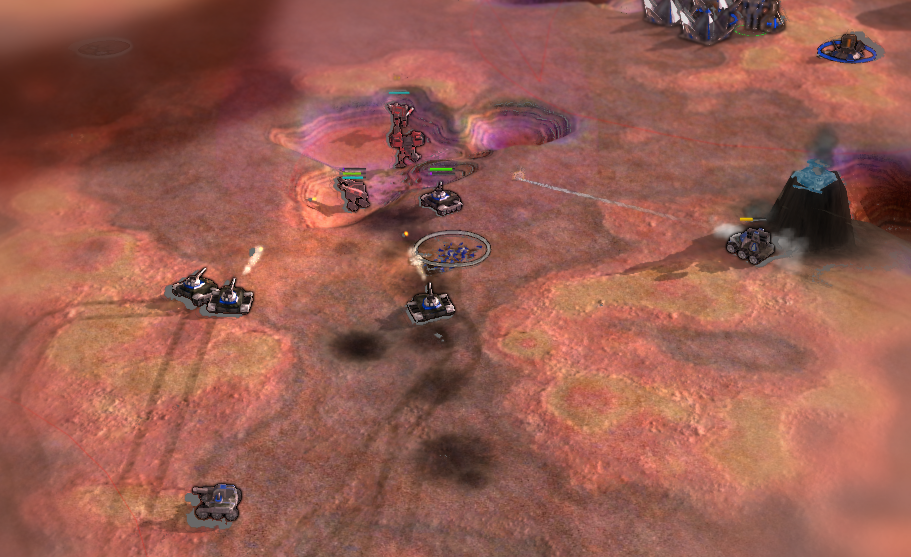 The Iron Fist's main use is defensive, but they can easily take out an opponent's poorly fortified base in a single, rather explosive, arrival.

Challenge: Ravagers are disappointingly terrible at dealing with heavy fortifications, high damage skirmisher squads and riot squads. You will ABSOLUTELY need artillery and even counter-artillery, should the opponent start building plenty of those.

Illustration of the Iron Fist squad raiding an opponent's base.

Use: badgers are great at denying the opponent's units from entering a certain point by creating a dangerous mine field over time at a long range. If you make enough of badgers, you can even make an entire wall made out of mines, which instantly recharges in a single volley, and which can even severely hinder smaller forces through direct fire. Impalers, on the other hand, are great at taking out key static targets like static artillery (Emissaries and Tremors), stingers, stardusts, power links, in a single volley, if you have enough of them. When no key static targets are present, Impalers are great at denying mex locations. 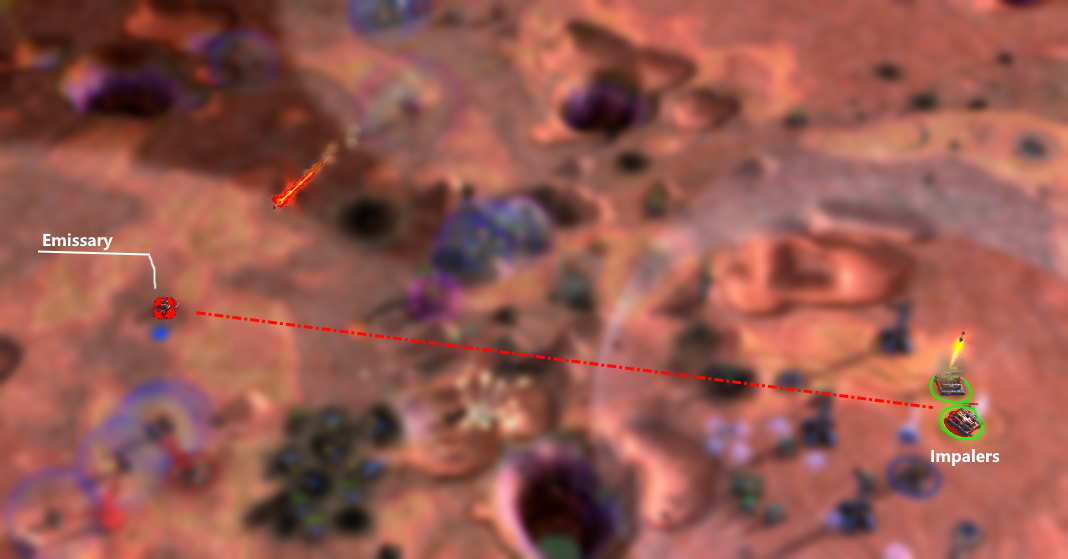 impalers are great at taking out enemy emissaries and tremors, since those artillery units require to stop in order to fire.

Rover artillery is one of the best tools for dealing with heavy shield balls.

Challenge: rover's artillery is fairly fragile, expensive, and it requires protection against light harassments, be it through sitting near forts, or nearby riot/raider forces. 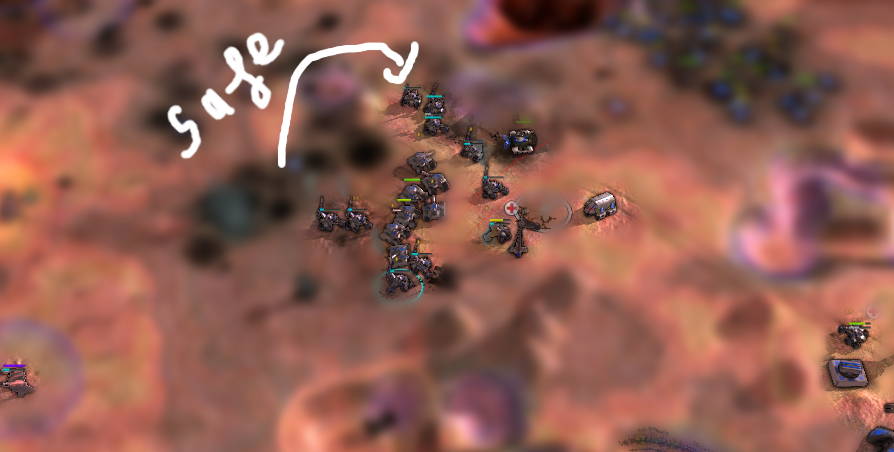 rippers ensuring that badgers are safe from close-range attacks.

When you have enough of Dart Rain squads and face counter-artillery fire, you can use aspises/aegises to ensure your artillery does not fall from a single volley, and let you obliterate the opponent's artillery with one of the best artilleries the game has to offer!

(6.6k-10k metal cost per squad) Use: the negotiators squad is capable of overtaking single powerful forts in sheer seconds, giving them to you instead of the enemy. The dominatrixes are safe from turret fire while the funnelweb's shield protects them, capable of absorbing stinger shots and stardusts long enough for dominatrixes to capture opposing defenses; while the irises allow dominatrixes to close their distance with relative safety. Should some dominatrixes get injured, funnelweb can quickly repair them back to full health. Funnelwebs are also capable of quickly conjuring stardusts to protect your future armies from open revolts.

Challenge: Dominatrixes deal damage based on how many units they managed to steal from the opponent in a single encounter. They can even reside behind the buildings they have made loyal to themselves. However, should dominatrixes require to fight more than one battle, the opponent can ambush them by adding heavy units that can take dominatrixes out quickly, such as powerful explosions, chip-damage, and sheer numbers of units, resulting in an open revolt between dominatrixes and its puppets. If claiming an entire fort is not enough for you, dominatrixes will never make their cost. Dominatrixes are also bad at chasing opposing heavy units. 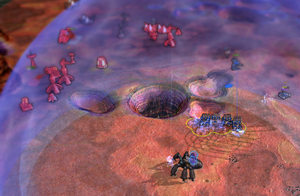