From Zero-K
< User:Shaman
Jump to navigation Jump to search

Welcome to the actual lore of Zero-K. Please note this is a work in progress and is totally original and not to be copied. People who copy this will be copied and the work will be claimed as my own.

Chefs are humanoid confectioners of the culinary arts. They are the main antagonist of Zero-K, motivated to grow their restraunt franchise. These chefs are trained for years before they are allowed to venture off into the Lobster Catacombs. Some are even former lobsters who have somehow been transformed into Chefs, although this is very rare. 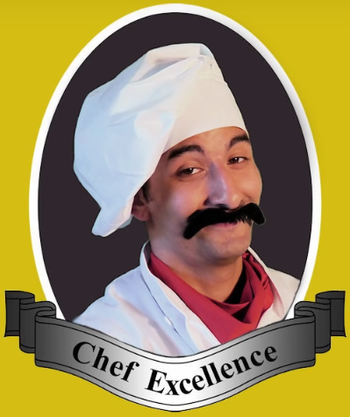 The Chefs' Most Excellent Leader

Lobsters are the main denizens of Zero-K. An aquatic creature that lives in cluster pots that enjoys parties, Lobsters are little to no threat to their archnemesis, the Chefs. They are sometimes encountered in the shallow end of the Lobster Catacombs.

Potatoes are the final, last best defense of the lobsters. These ancient golems of uselessness dwell deep inside the lobster catacombs, protecting the heart of the catacombs from the Chefs.

It is unknown what created them or why they were created.

A subclass of chefs. The Wubsters desire to transform the Lobsters into resignateers. Failing that task, their sole purpose in life is to make you miserable so you resign.

When lobsters have been cooked so much, they eventually transform into resignateers. It is not known what exactly causes this process to occur. Resignateers are often employed by the queen Lobster to combat the chefs, but they are utterly ineffective in combat as their only ability is to resign, and they often fail at doing that.

Storages are totems that the lobsters erect in their bases, often creating massive fields of them. These storages are said to call upon the Shiny gods, often to their owner's detriment.

If a lobster does not erect storage totems, they will often create Porcy Fields in their backyards. It's unknown why they do this, but it's often speculated that they're trying to scare off the chickens. Often times these porcy fields are too much for chefs to cook using traditional methods so they must dust off and nuke the site from orbit as it's the only cure for a porcy field infestation.

A very new brand of lobsters, however, more resilient to cooking. Cobblestones are the natural evolution of lobsters. With a hard shell, and rock hard will, they're dangerous opposition.