The Zero-K Matchmaker allows players to automatically find a game with other similarly skilled players to participate in. This solves the problem of highly rated individuals being disappointed by having to fight with newbies on their team.

The Matchmaker can be found in the Multiplayer tab. You will be presented with a list of possible game types to play, as well as a short description of these. 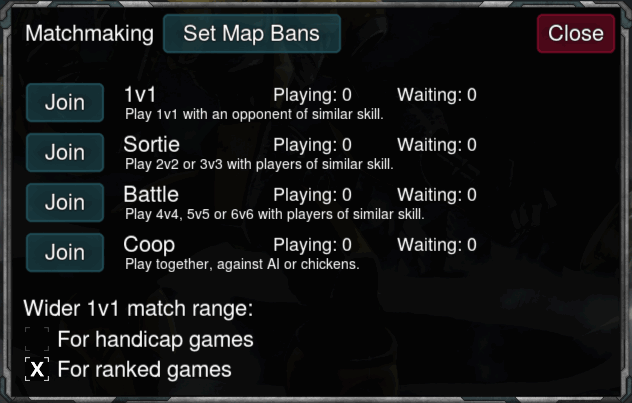 After selecting the preferred gametype(s), you can freely join rooms or spectate battles until a game is found. If you decide to play in a custom battle, you will simply be removed from the Matchmaking queue without any further penalties.

Once a match has been found, you will be informed both visually and audibly by a pop-up, asking you to confirm that you are ready to play the game. Once the match has been accepted by all players, the game will be started on a randomly selected map from the game type specific map pool. Should one of the other players not accept the game, you will be put back into the Matchmaking queue until another game is found.

If no response is made within 30 seconds or the request is denied, you will be removed from the queue. If you ignore or deny a found match, you will be unable to join the Matchmaking queue again for a few minutes.

Once you have joined a queue, the Matchmaker will continuously look for other players to pair you with. Each player is assigned a maximum rating span, and the difference between maximum rating and minimum rating in a game must not be greater than the maximum rating span of all players. This span is progressively widened as the player is waiting, up to a maximum width. The matchmaker will always prioritize the players which have waited the longest. I.e. it will rather make a game with a big rating difference to accommodate a player that has waited long than make a game with a small rating difference containing players that have just joined the queue.

You can join coop and team game matchmaking with friends by first creating a party with them, and having one member of the party join the matchmaking queue(s). All members of the party will join the game, and the balance algorithm will try to keep players in the same party on the same team.