You can select your units with your mouse, with your keyboard, or both.

To manage your selection you can

Selection rank is a unit state that determines which units are selected when dragging a selection box. Only the units with the highest rank in the selection box will be selected. This keeps buildings and construction units from being selected with combat units.

To select a mixed selection of ranks, hold Shift while dragging the box. Holding Ctrl also selects mixed selections of ranks (except for rank zero). This is to allow selection hotkeys such as Ctrl + Z to select across ranks. Double-click selection has similar behaviour. These thresholds are configurable under 'Settings/Interface/Selection' (with Simple Settings unticked). 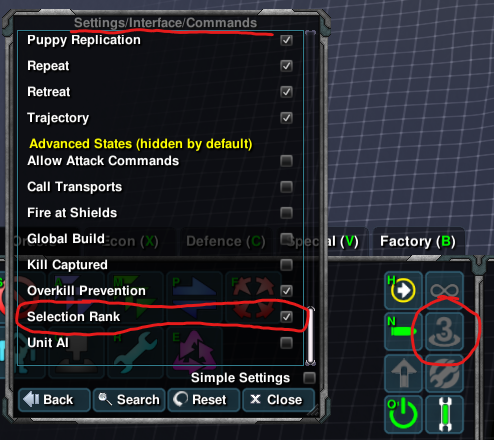 Selection ranks can be modified mid-game for individual units via a state toggle. This toggle is hidden by default. To enable it, tick it in 'Settings/Interface/Commands'. Left click advances the rank and right click decrements it.

By default, most buildings have selection rank 1, factories and constructors have rank 2, and all combat units have rank 3. These defaults can be modified in the Ingame Menu under 'Settings/Unit Behaviour/Default States'. Alternately, click 'Edit Behaviour' in the unit info box that is brought up by Space-clicking a unit. For example, if you don't want your anti-air units to be selected with the rest of your combat units, their selection rank could be set to 2.

Selection ranks exist independently for each player—and even for each spectator. This can be useful in shared control coop games to avoid selecting units that your allies are trying to control.

There are multiple hotkeys to help with selection. The default bindings allow you to select:

Factories can also be selected using hotkeys. Your first factory will be on Alt + Q, the second factory you build will be on Alt + W and the next one on Alt + E, and so on. This assumes that you have the QWERTY keyboard layout.

You can select missiles from the Missile Silo by either clicking on them or by selecting the Silo and pressing D.

All hotkeys are editable in the settings menu at Menu→Hotkeys→Selection. There are many ways to select your units that do not have default hotkeys.

Autogroups are custom selection hotkeys that you can set up on the go. They allow units to be automatically added to a control group.

Ever wished to have all fighters in group 7, all gunships in group 8, all raiders in 4, etc.? "Autogroup" achieves just that.

Auto grouping is a feature of Zero-K (widget).

Autogroup settings can be modified from the in-game menu: Menu→Settings→Interface→Control Groups.