Overdrive is an ability of Metal Extractors that allows them to drain Energy to increase their Metal income. It uses a grid mechanic that is also required by some powerful defense structures to function.

To view your energy grid, turn on the economy screen by pressing F4 (by default) or by clicking the

The more energy a Metal Extractor uses, the less efficient Overdrive will be.

The energy available to Overdrive is dependent on a team's energy storage, income and expenditure, according to the following formula:

A team with full energy storage spends all of its excess energy on Overdrive. Overdrive always costs energy and does not occur if a team's expenditure exceeds its income. All the available energy is spent, provided that there are sufficient grid connections.

Overdrive generates metal by increasing the income of mexes. Each mex spends energy individually and receives income according to the following formula:

Selecting an economy structure will show the effect fields of all economy structures. The color of the field denotes its efficiency: goes from purple to red as it becomes increasingly inefficient. Pink means that there is currently no benefit from Overdrive in the grid. If a structure is disabled for any reason (EMP, for instance), it loses its grid connecting functionality. Its field turns gray to indicate this.

Grids with the same color do not need to be linked, as they are operating at the same efficiency. 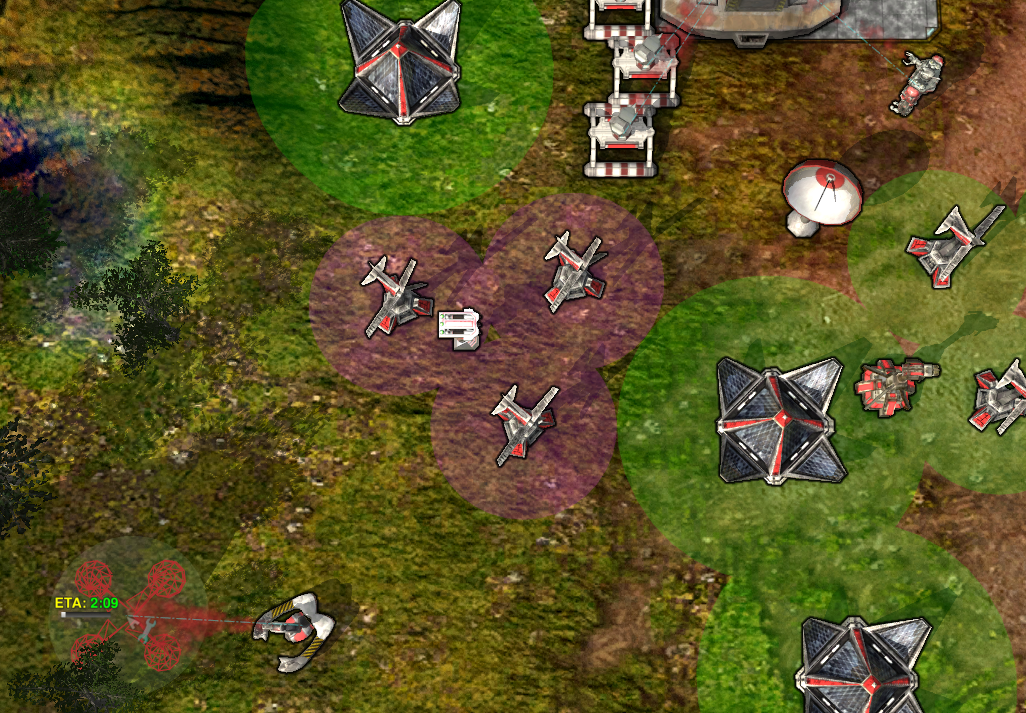 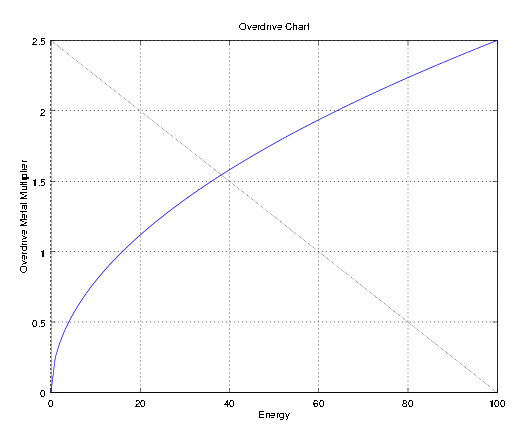 Overdrive becomes less efficient as Energy keeps being added to the same grid.

The Overdrive equation has diminishing returns. It takes 16 Energy initially to double the income of a mex, and a further 48 energy (64 in total) to increase the output to triple its income. As a result, your metal to energy conversion ratio improves as more mexes are built and added to the grid.

For example, compare four +2 mexes in a grid to a single +2 mex, each in grids that have been allocated 16 Energy. Each mex in the four-mex grid receives 4 Energy, which overdrives them each by 50%. Therefore, the mexes each generate +1 Overdrive Metal, for a total of +4. The single mex receives 16 Energy, so it is overdriven 100%, resulting in +2 Overdrive Metal. Spreading your Overdrive, and thus your grid, between many Metal Extractors improves the efficiency of your Overdrive.

In practice, only about half of your extractors need to be linked to an Overdrive grid for most games. The cost and risk of linking extra extractors can be too great for the minimal gain of linking an already efficient grid. It can be advantageous to construct a few small energy structures next to many of your mexes to take advantage of the highly efficient low levels of overdrive.

Overdrive works by increasing base income, so Metal spots with unusually high income are particularly important to overdrive. Such Metal spots can be found in the center of many maps, which makes the task of overdriving them safely quite difficult.

The Overdrive equation has been solved to optimally distribute energy to the mexes that will yield the greatest income, so you never need to worry about connecting mexes with different incomes to your grids. Try to capture Metal spots with high income and overdrive them as much as possible. These extractors will max their grid sooner than others, so keep track of their energy usage.

The tooltips of Metal Extractors have information to display how efficient your Overdrive is. For example:

Metal Extractor—Income: X + Y% Overdrive
Energy: -Z
This shows the state of a single extractor. X is the base Metal income of the extractor. Y% is the extra Metal income from overdrive. Z is the Energy used by this extractor to produce the extra Y% of income.

Energy source—Grid: Y/Z E => X M
This shows the behavior of the energy grid that the structure is part of. X shows the total extra Metal produced due to Overdrive in this grid. Y shows the total energy expended to produce this metal. Z shows the Energy production of all the energy structures of the grid. Z is the upper bound of Y.

The color coding on an energy grid is determined by the amount of energy required to make 1 Metal. From this, you can roughly approximate how long it will take for an energy structure to repay its Metal cost in overdrive based on grid color. These numbers are theoretical and not exact in a game environment, but a good guideline.

Wind generators are not part of this table because their output varies as the wind strength changes. They can, however, be very efficient, especially since they take very little time to build and can start providing resources sooner than more expensive options. 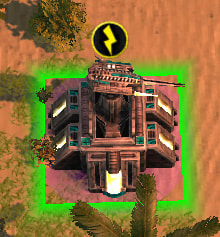 A disconnected Lucifer will not fire.

Some defense structures, like Cerberus, Desolator and Lucifer, require connection to a grid. The grid must have a minimum power output for the structure to work; however, any number of the same structures can use the same grid once that minimum is met for one of them.

If a defense structure is not connected to a sufficiently powerful grid, an energy icon will display over it and the structure will not function.