From Zero-K
Jump to: navigation, search

It's no secret that a big army stands a good chance of beating a smaller army. However, the larger force's advantage can be a lot bigger than you think.

Suppose you have a certain amount of artillery, and your enemy has a different amount of identical artillery, and both are steadily shooting at each other and reducing each other's numbers. If everything else is equal, who's stronger? Obviously, whoever has more guns. How much stronger? Obviously, the proportion between the size of the first army and the size of the second, right? Blue has three times as many field guns as red, so blue is three times as strong.

"Wrong!" said Frederick William Lanchester, a British engineer and mathematician who lived from the middle 19th century through the end of World War II.

In 1916, Lanchester devised a series of differential equations to demonstrate the power relationships between opposing forces. Among these were Lanchester's Linear Law (applicable to ancient combat, where engagements on the individual level were purely one-on-one), and Lanchester's Square Law (for modern combat, where multiple individuals can attack a single target). It is the square law that concerns us here in ZK.

According to the square law, the relative strength of two forces is given by the ratio of the squares of their relative numbers. Thus, while two Stumpies are four times as strong as one, four Stumpies are sixteen times as strong as one. Note that the Square Law does not apply to multiple weak units against a single strong unit: for a lone tank A to be able to compete with four opposing B-tanks, tank A needs to be qualitatively four times better (four times damage, four times HP) than an individual tank B.

The Square Law is why ten Minotaurs take a lot less than 50% losses when squaring off against five Minotaurs.

So, if numbers are so important, then why doesn't sheer spam win out every time? There are several reasons for this:

What does all this mean to me?[edit]

Due to the squaring effect, you should take note of the following:

Why you should be attacking

This is more a philosophy of how you should be playing, but if you want to be better at the game, one of the key principles is just to be aggressive. It's a war game, so fight! Put simply, you cannot win by defending. The only way you'll ever win by defending is boring the enemy to death. You'll have to attack eventually, so why not attack now instead of later? Sure, later you'll have more units and economy, but Zero-K's mechanics will put them even further in the lead.

Attacking is thusly an economic decision. Metal is the most important resource. The only way to get metal is to expand and take Metal Extractors, or to fight the enemy and reclaim their wrecks. Thus, metal represents territory conquered - you must always be trying to gain territory from the enemy to get more metal. This means aggression.

If you build a lot of energy structures to overdrive your mexes it gives you no advantage - the enemy can do the same thing, and will do so faster if he is more aggressive about taking mexes.

Take the situation of a 4v4. On one team, 3 players fight, one builds economic structures. On the other, all 4 fight.

Given equal skill, the 4 fighting players will win - they will take more territory, more metal spots, and when they destroy their enemies they will get to reclaim all the wrecks (both from their own dead units, and the enemy's dead). All it takes is one commander wreck and they have a huge economic lead - probably much more than the player who goes pure economy, while having wiped out all his allies.

What if all players from team 1 build defences, and on team 2 they attack?

Even assuming team 1 manage to take at least half the map (which, given a less offensive approach, is unlikely) an intelligent team 2 will see the amount of defenses they have, and know that this means less offensive units. Having the advantage in offensive units mean they need not fear attack from the enemy - they have more mobiles and can thus always beat him even with only token static defense. Team 2 can spend the rest on economy consolidation, much more than the players who are devoting their resources to defenses. Since Zero-K has many, many heavy weapons and units, there is no defence that can hold forever. All Team 1 are doing is delaying the inevitable.

Defense structures in Zero-K are generally a match for twice of their cost in mobiles, even more if they are fighting a unit type they counter (Stardust vs Glaives, for example). This, along with the simplicity of managing them (deploy and forget), makes it tempting for some players to use them a lot, or even to the exclusion of all else.

It goes without saying that this is a Very Bad Idea™ indeed.

Mobile units being, well, mobile, means that they can gather in a single area (namely, where the action is happening), while statics, being rooted to one spot, must be spread evenly across the defensive perimeter. This means that attackers can easily achieve local net superiority over a static-reliant defense, resulting in a line of useless defences and a breach in the line - and that's before we discuss the effects of artillery against statics. In contrast, mobiles can respond to an attack at any point, relying on the few local statics to give them the small but crucial net advantage over the enemy.

Therefore, a better player will concentrate defense only at key points and sprinkle it over the rest of their perimeter, relying primarily on mobiles for defense. But is there an even more effective way?

Numerical weakness comes from having to prepare against possible attacks; numerical strength, from compelling our adversary to make these preparations against us. — Sun Tzu

Yes, the best way to resolve the problem of static vs mobile defense is to leave the question to your opponent. By attacking, you force the enemy into a defensive posture, forcing them to spend more on defense while you have to spend less. With more resources for mobiles, you can contest mex spots and wrecks more effectively, resulting in an even greater resource advantage. Additionally, the psychological pressure will make your opponent more prone to making mistakes, which you can exploit effectively to create a similarly vicious cycle.

Be wary of those who do expand, but slowly as they porc and build up mobile defenses, as they can not only outexpand, but they also have defensive installations, making defenses that cannot be breached easily.

So, again, attack. It's the only way to win.

Relying on a single type of units is fatal, pure and simple. Every type of unit in Zero-K has a hard counter. Here's a reminder:

That is Zero-K combat in a nutshell.

Being in the tutorial, this is common knowledge. However, some unwise Commanders still simply rely on a single units.

Instead, mix it up! Riots and Skirmishers make a good mix, and Artillery can defeat defences that would annihilate other units. Better still, have all unit types represented in your assault force, so they can defeat anything the enemy can use against them.

Most players know that most units (skirmishers in particular) do best in a line or encirclement formation, which allows the maximum amount of forward firepower. The best way to counter this is to run up beside the line, and then down the line (parallel to it). This move, known as crossing the T or enfilade, exploits the weakness of the line formation as units on the far end of the line will often be out of range and/or obstructed by friendly units further up the line. Frontal attacks on a line should be avoided whenever possible. 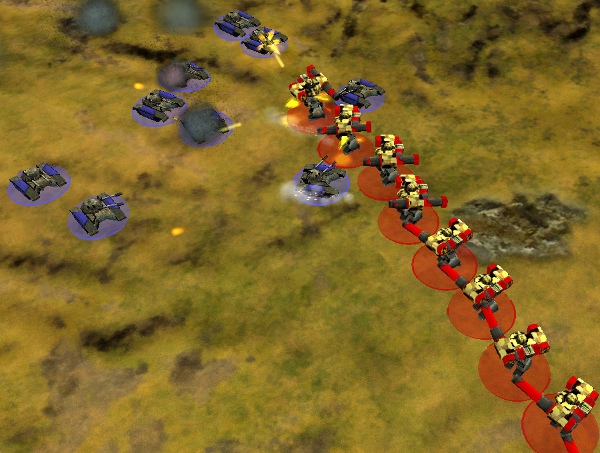 This manoeuver also works on static defenses, although open ends in the line to flank are generally less frequent and it's usually better to ignore the rest of the line and proceed straight to the base once the perimeter is breached.

The Shield and the Rapier[edit]

When a head-on assault on a defense line is called for, one trick to increasing your firepower is to mix some raiders with assault units. The assault units close in first to draw fire from enemy defenses, then the raiders move in for the kill with their superior DPS. In addition to increasing the odds of a successful breakthrough, this also makes a raider force immediately available to attack the enemy's logistics once the enemy's defense line has been penetrated.

The Bow and the Spear[edit]

When you have lots of skirmishers, mix them with riot bots as you attack an enemy group. The skirmishers can handle the other skirmishers and assaults, units riots have problems fighting (The former will kite and the latter can tank and destroy) while the riots kill swarms of raiders and units that are jinking the fire from your skirmishers. This stops fast units breaking through and slaying your skirmishers, or skirmishers outranging your riots and killing them with no attrition. The riots will also kill weakened units fast, so the skirmishers don't need to reload to kill the units that survived the barrage.

Looking for a spiritual successor to the Goatly Maxims. - KR