This mechanic is no longer present in the game. The page is retained for posterity.

In Free-For-All (FFA) games you may create temporary alliances called ceasefires. This gives you some breathing room by allowing you to expand somewhat freely without getting weakened by skirmishes with your direct neighbors. It is often mutually beneficial to make a few friends before the battle lines are fully drawn and the map is too crowded for everyone. That is when the backstabbing begins.

Hover over the check box under the CF column next to a team. It will give a brief explanation and the state of the ceasefire with that team. Check that box to make a ceasefire "offer" to that team.

When both teams make a ceasefire offer, a ceasefire is made. During a ceasefire, neither team's units will attack each other. The following two images show examples of the ceasefire interface.

Note: If there is more than one player on your team, each player must check the box to "vote" for making the ceasefire offer before it is made. 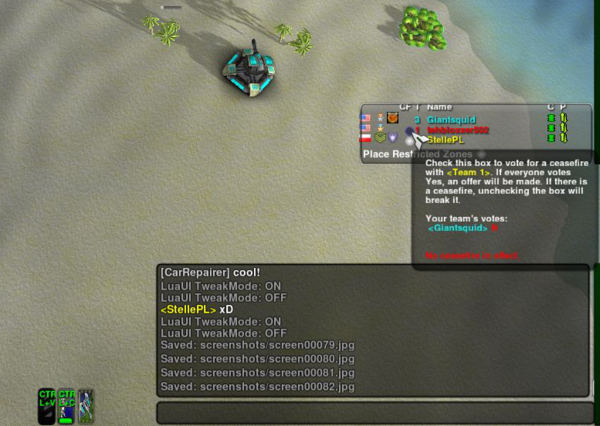 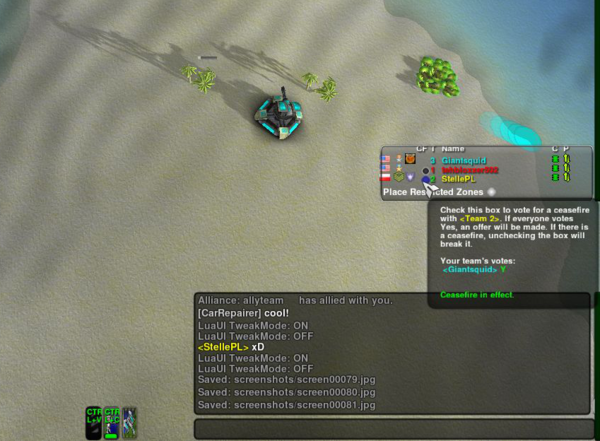 Ceasefires are only temporary and those teams you ally with are still ultimately your enemies. You don't want their units sneaking around your base! You can create restricted zones to delineate areas where the enemy is forbidden. The moment a temporary ally's unit enters a restricted zone, the ceasefire immediately breaks and your armies will attack each other.

Check the box labeled Place Restricted Zones and you can paint small circles on the ground. Use the right click to erase them.

Important: Temporary allies cannot see your restricted zones. It is advised that you draw lines and place labels so they will know where they may not enter, otherwise you'll have a diplomatic blunder on your hands. 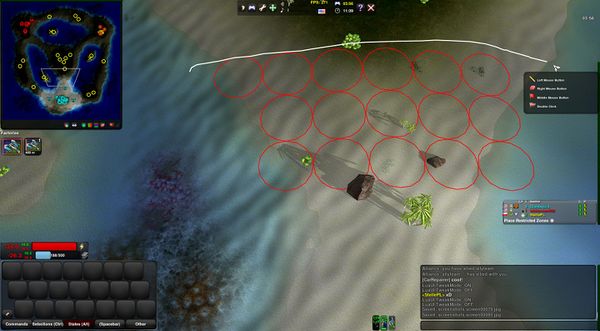 If a temporary ally launches a nuke at a point that is inside one of your restricted zones, it will also break the ceasefire. This allows your anti-nukes to intercept it.

Remember that ceasefires are temporary. You cannot win the game even if the only teams left are ceasefired with you.